For this assignment, we had to build a rocket! It was a paper rocket with a nose tip, a body and fins.Mine said  rocket in rainbow on the side! I added two different materials into the nose tip. I was learning about the four forces of flight! I learned what other people did through flipgrid! We all made flipgrid videos to show our rockets and answer questions! Here is my video:

I would improve my rocket by trimming the fins to make it more aerodynamic so that it can fly higher, faster, farther and smoother!

It’s Pink Apron! I recently read a book, Egghead. It was about a boy who is bullied. I am not going to say much more because I don’t want to spoil it. Anyways, we were assigned the task of doing a final project and I decided on a mix tape. I took seven songs and put them together. Those seven songs were about something related to the book. The artists of the seven song I chose are:

Here is the mixtape (sorry about the occasional clicks

I also had to create a Cd cover.  I added the names of four characters and a quote that they said in the book. 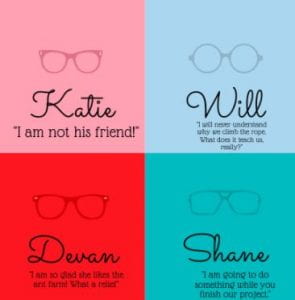 We also had to write at least four sentences about why we chose each song. Here are the sentences:

Fifteen = I chose this song because in the beginning of Egghead, Katie and Will are starting high school and that is what the song is about. In the first little bit of the song it says.

The Bully = I chose this song because it is about bullying. In the song it says that “You’ve given all the scars to heal your own.” Shane is bullying Will because he is hurt by Riley so he is taking out his anger on Will.I think this is a good song and this is the only real song about bullying.

You belong with me = I chose this song because Devan likes Katie. In this song, a girl thinks this boy should be her girlfriend but he is dating someone else. This is a similar situation because Devan wants to be Katies girlfriend but Katie isn’t interested in dating. Especially boys like Devan.

Wake me up = I chose this song because Will sounded like he was under a lot of stress.Nobody wants to be under that much stress. I think that Will took the chance to relax in the coma because he didn’t have to worry about any bullies.  Then, Will woke up to one of the bullies now being  nice to him and visiting him in the hospital.    “Wake me up when it’s all over.” Wake me up when the bullying is done.

Coming home = I chose this song because this is the part of the book where katie’s dad comes home from the hospital and Will goes to live in London. I imagine that Katie is very happy in this part of the book. If your dad came home from the hospital wouldn’t you be happy? Will moves to London. Now, this might not be his home but he will make it one.

Happier = I chose this song because Devan is happy that Katie likes the ant farm. He wants Katie to be happy. So does Will obviously because Will gave  the dinner coupon to Devan and Katie.Katie is happy at the end of the book. She got a date with Devan, a letter from Will and a new ant farm!

Ain’t never had a friend like me = I chose this song because in the end of the book, there are lots of new friends. Will and Katie are kind of friends, Katie and Devan are friends and Devan and Will are friends. I think that Will gave Katie the gift card because he wanted Katie to be happy and he saw that she would be happy with Devan.I think that the author should have made a part of the book where Katie apologizes to Will for what happened at the dance because the letter sounded like he forgave her.