In science class, we had to make a rocket ship on an app called Tinkercad! Tinkercad is a website where you can design something that can be 3D printed! We also had to answer some reflection questions afterwards! Here is a google slides presentation that has everything! Please don’t edit anything!

When we got back from break, we were assigned an assignment of writing two paragraphs about our winter break. We also needed a visual. My visual is a pixelated photo that I am working on of me and my brother! In the paragraphs, we needed to use three literary devices. (Those are the words in red!)

On my winter break, I ran a camp for my brother! On the first day of camp, we played with my brother’s Chanukkah  gifts which were 4 different dragon collectible toys! The dragon toy came in an egg that you can break open and find your dragon! You can scan a QR code and download an app that displays an arena wherever your camera is (so you can have a fake arena in your house) and then you scan the dragon and it appears on the arena too. Then you can use your dragon to battle another dragon (who is a bot) and you can control your dragon. Then we went on a walk together to give his friend a present! On the walk, my brother kept saying that he wanted to go to the park but it was 7000 steps away! When we got back, we painted a little bit until lunch. For lunch, I made my brother macaroni and cheese and I made myself salmon! While my salmon was in the oven it burst into flames like a forest fire!

After lunch, we went to dollarama! It was the biggest dollarama I’ve ever seen! It was the size of Costco! We bought so much stuff! We spent almost an hour there and bought five bags worth of stuff! When we got home we made brownies! Inside the brownies, we put whites chocolate and milk chocolate! Then Asher and his friend Nikki played in his room! The next day in the morning we read a little bit and then went on a walk to the park! After the park, it was almost lunch so we made lunch. After lunch, I cut up a cardboard box and made it a big flat strip. Then I outlined a hand multiple tones all over the board and drew fingernails. Then I gave Asher, Nikki, and Noa paint and paintbrushes and they got to paint and decorate the nails!

Then we went outside again and made hot chocolate when we came inside!

The other days we didn’t do much but we had a lot of fun! I love my brother and I can’t wait to spend more time with him on break! 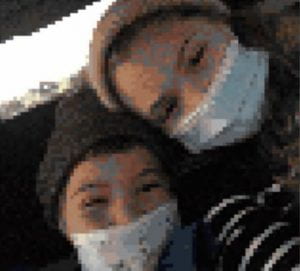